THE BASIS FOR A NEW HUMAN CIVILIZATION

by the World-Friend
Adi Da

In this book, Adi Da offers invaluable wisdom on going beyond the
separative worldview to peaceful, cooperative co-existence. 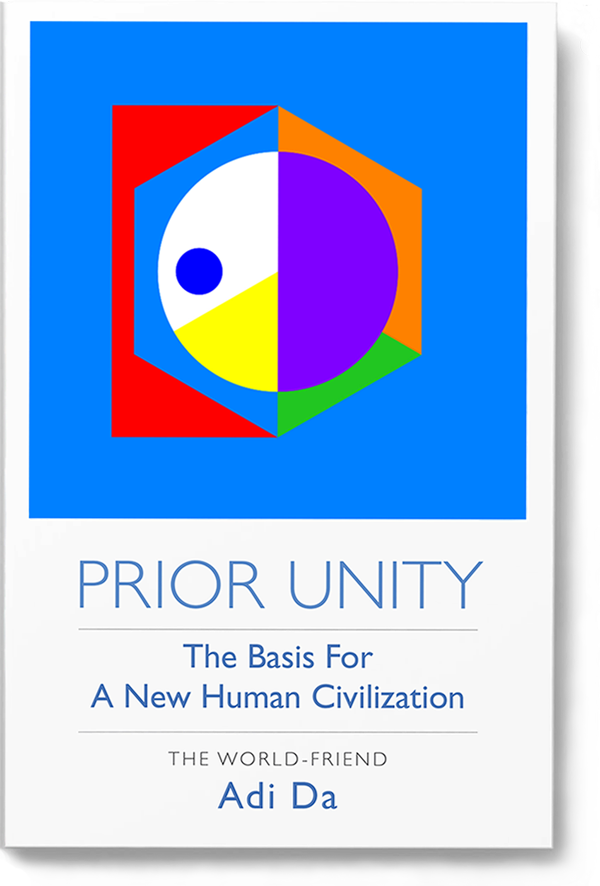 The message of the book Prior Unity is that the impulse to peaceful, cooperative coexistence is humanity’s “true north”. The impulse comes from our root-intelligence as one single species, and, at the same time, reflects the inherent unity of all life. To satisfy what human beings truly want and need (security, and the opportunity for unlimited participation in our social, cultural and economic life), and to ensure a benign future for life on earth, we have no choice: We must transcend what separates us and build on the deep foundation we all share, which is our prior, or already-existing unity.

The prophetic call running through the whole book is that if we want to find the real basis for a new human culture, we must look beyond the outer world of separate objects, others, and events to the source, the root-condition in which all our experience is actually happening. This is not a religious matter, nor even a spiritual matter in any exclusive sense. It is about the source-reality that has no name, that is not a deity, but which is the being-essence in which we exist, the limitless conscious awareness to which everyone of us has access, regardless of our beliefs or philosophy.

This is not a book about politics as we know it. It is about uncovering the true basis for a new politics, a new social contract that is founded in, and expressive of, how things really are.

About the Author, the World-Friend Adi Da

From his birth (on Long Island, New York, in 1939), Adi Da always manifested unique signs of spiritual illumination. Nevertheless, from his birth, and until his spiritual restoration at thirty years of age, Adi Da submitted himself to an ordeal of “self-identification” with all the limitations and sufferings of the human condition.

Adi Da describes his early years as being focused in two fundamental activities: investigating how, in the scale of human “ordinariness”, to perfectly realize the Truth of “Reality Itself”, and (coincidentally) both achieving and demonstrating the human-scale ability to communicate the Truth of “Reality Itself” through both visual and verbal means.

Adi Da graduated from Columbia University in 1961, with a BA in philosophy, and from Stanford University in 1966, with an MA in English literature. His master’s thesis, a study of core issues in modernism, focused on the literary experiments of Gertrude Stein and on the modernist painters of the same period.

In 1964, Adi Da began a period of intensive practice under a succession of spiritual masters in the United States and India. In 1968, he went to India and approached the renowned spiritual master Swami Muktananda of Ganeshpuri, who immediately responded by saying that Adi Da was a spiritual master at birth, and “the most extra- ordinary Westerner” he (Swami Muktananda) had ever encountered. One year later, in a unique letter of acknowledgement, Swami Muktananda made an open public declaration that Adi Da, by virtue of his evident spiritual signs and demonstrated states, was inherently qualified to teach others independently, and to awaken others spiritually by direct transmission.

Endorsements for PRIOR UNITY

“It is a rare event in human history when a truly enlightened master speaks directly to the world situation, what must be done about it, and the consciousness from which all action, individual and collective, must proceed. This is a profound book. We must take it seriously.”
BOB ANDERSONFounder And Chairman, The Leadership Circle
“Our essential oneness has been emphasized through the centuries by sages. The book Prior Unity highlights the essence of oneness, for action that generates results: knowing we are one; moving from competition to cooperation; being responsible; and refusing to play in ego-based, exploitative games. Prior Unity is an inspiring and profound call to action.”
MONICA SHARMAInternational Expert And Practitioner Of Leadership
“If humankind is going to make it to the other end of this century, it will only be by recourse to great Wisdom-Action, as presented in Prior Unity. And only together, as Earth-World all together—as one, not two. Profounder Wisdom is not available anywhere—nor more radical action. Drink from this source—deeply, from its infinite depth.”
ROLF C. CARRIEREFormer U.N. Official, Senior Advisor To Nonviolent Peaceforce
“Prior Unity is a path-breaking compilation of Adi Da’s teachings on planetary non-dualism. Individual and social cooperation can be expressed only through the responsible activism of an embodied, inclusive global community. Let’s make it happen!”
JAMES B. QUILLIGANInternational Economist
“Every human being who reads Prior Unity will re-awaken to the truth that we are not separate individuals, nations, and races, but members of one global family that arises and exists as an egoless prior unity. Read this book—and take responsibility, with all seven billion, for the earth and all of humanity as a single system.”
HUGH O-DOHERTYJohn F. Kennedy School Of Government, Harvard University
“This is a sacred book to be read from the sacred space within us that has never forgotten we have always been one and we can manifest this prior unity on earth straight away.”
LISETTE SCHUITEMAKERAuthor Of "Alight", Chair Of The Center For Human Emergence (The Netherlands), Chair Of Trustees Of The Findhorn Foundation
Previous
Next

Professor Leo Burke Speaks about the Book PRIOR UNITY

For more than 25 years, Leo Burke has taught, coached and trained people who aspire to be genuine, effective leaders. In this video presentation, Professor Burke explains why he thinks the book Prior Unity offers a fundamental method for every human being on earth to step beyond the separative worldview that has created so much havoc, and enact what Adi Da calls the “active disposition” or “working presumption” of prior unity.

"Something new must emerge."

In the following essay, the World-Friend Adi Da calls for a new global process, which would, in his words, give “governing force” to the principle of prior unity. How is this to come about? It requires, as he says, “an instrument” that would enable global humanity to become self-organized and self-managed. He names this yet-to-be-realized instrument the “Global Cooperative Forum”.

The necessity for such a Global Cooperative Forum rests on the fact that no presently-existing global organization is equipped to truly deal with the complexity of the world situation. While global organizations, such as the United Nations, were established after the Second World War, they have been unable to function effectively for the well-being of the whole because of the prevailing paradigm—which is that of separate parties negotiating settlements that maximize their own self-interests. The global good (both human and non-human) is thereby subordinated to the aims of the separate parts. In the current world, human beings are simply suffering this situation, or exploiting it, or both. Therefore a shift of consciousness is essential, from the mind of separateness and competition to taking responsibility for the whole.

In this essay—and (in more details) in his book Not-Two Is Peace—Adi Da describes how the Global Cooperative Forum would be the expression of “everybody-all-at-once”—meaning the unique force and potential in humankind when it wakes up and becomes aware of itself as one family, even one “system”, existing in unity with (and responsible for) the entire Earth-system.

Read excerpts from Prior Unity: The ego-Culture of Separateness and The egoless Culture of Prior Unity; Be Part of Humankind First; The Urge To Participate; The “Everybody Force”; No Enemies.

Related Book by the World-Friend Adi Da:
NOT-TWO IS PEACE

In this book, the World-Friend Adi Da, speaks to the deteriorating and dysfunctional global human system with a passionate calling for global change in the form of the “Global Cooperative Forum”—a unique global institution founded in the inherent truth of prior unity.

“…this Call to Right Life and Peace is a great and absolute moral Law, which I have Epitomized in the Formula C+T=P, or “Cooperation + Tolerance = Peace”. It is absolutely essential that the universal collective of humankind formally embrace and really enact this universal moral disposition.”

– The World-Friend Adi Da, from Not-Two Is Peace 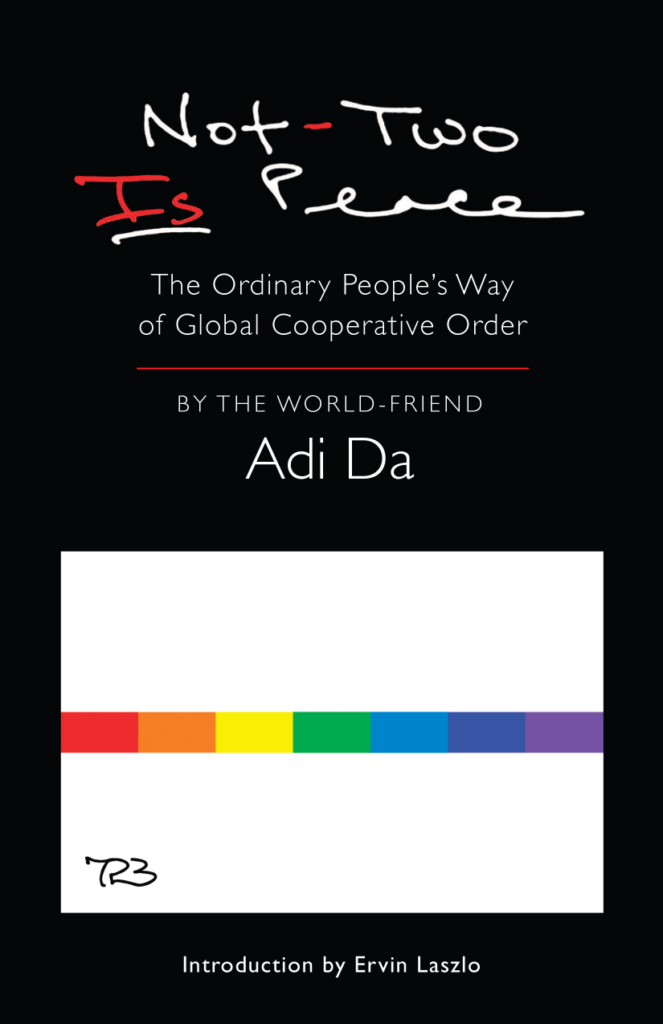 About
The Book
The Author

“The fundamental urge of humankind-as-a-whole is to participate—not to be shut down, not to be thrown back on themselves, not to be treated merely as consumers who want this, that, and the other thing. People want the opportunity of participation. All over the world, the energy of participation is what should be tapped.”

– The World-Friend Adi Da,
from Prior Unity